“André Parfenov is not only a great pianist, but also a wonderfully versatile composer.” PIANO NEWS 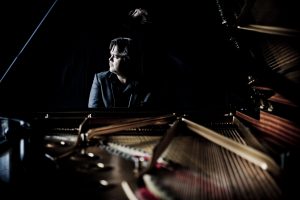 The specific emotion and energy of the person who has created a work and performs it himself is something special and unique. Thus the audience can experience André Parfenov, who is equally impressive as a composer and a soloist. His music is rich in imagery and descriptive, and the interplay between atonal elements and sections full of harmony and melodiousness makes his works sound new and fresh.

André Parfenov’s works are multifaceted and sometimes have a contextual relationship to compositions by earlier master composers, but never copying or transposing, but as independent musical expeditions that create a thoroughly new world of sound from the given essence, which also differs stylistically from the earlier works. Increasingly, he expanded his compositional oeuvre. During his years of study, he created a much-noticed homage to Maurice Ravel written for the left hand and composed a new finale for Johann Sebastian Bach’s unfinished quadruple fugue from the cycle Kunst der Fuge. During this period, he also wrote several choir and orchestral arrangements.

His ballet music, which is of special importance in André Parfenov’s oeuvre, is regularly written for the choreographies of Robert North. One of the particular works of this genre is the music composed in 2014 for the ballet Verlorene Kinder, which was inspired by the plane crash near Überlingen on Lake Constance, in which two passenger planes collided and crashed. The soulful staging of this ballet, in connection to the haunting music by André Parfenov, met with wide approval and the highest praise from the press. It caused a necessary discussion on the role of art in connection with tragic accidents. André Parfenov developed expressive orchestral suites from the music of the ballets Verlorene Kinder and Kasimir Malewitsch. Along with his violin concerto, which he dedicated to Vadim Repin and which soon premiere, these music pieces are the most intense symphonic works that André Parfenov has created to date.

André Parfenov writes the lion’s share of the pieces performed by the Parfenov Duo himself, alternatively arranging existing works for violin and piano or solo piano. He thereby builds a creative bridge between the works of Beethoven, Rachmaninoff, Liszt, Prokofiev and Ravel and his own compositional ideas. An attentive listener will recognize elements of Russian modernism and French impressionism, all the way to tango and jazz.

In 2013 André Parfenov won the special composition prize at the international composer festival ‘Ensemblia’. During the same year, he also received the title and medal ‘Honored Artist of Bashkiria’ from its President. In 2014 he won the ‘Theatre Oscar’ of the newspaper Rheinische Post for his ballet music for Robert North’s choreography Verlorene Kinder.

More ballet music and premieres followed with Chagall-Fantasie (January 2015), Pinocchio (October 2016), and Kasimir Malewitsch (May 2019) at the theatre Krefeld and Mönchengladbach. He also composed his New Goldberg Variations (2019), which was highly praised by experts, and which is an interpretation of the essential substance of the well-known variations by J. S. Bach, the result of which is an astonishing range of sounds that extends from the baroque to the world of jazz. The recently published CD Liszt Imagination focuses on the works of Franz Liszt around the figure of Mephistopheles. It broadens the brilliant tonal richness of the original compositions with the color of the violin sound.

A whole new project will soon complete: André Parfenov composed a Tchaikovsky-style waltz for the Aachen Symphony Orchestra. The Russian composer adapted an earlier, little-known sketch to a waltz on August 12, 1878, in Aachen. Only 8 bars with the designation E major waltz have survived, but these small impressions are quite enough for André Parfenov to create a rich work for large ensembles that bridges the gap between Tchaikovsky’s music and his own sound ideas. The general music director of the Aachen Symphony Orchestra, Christopher Ward, plans a world premiere in the nearest future. Nevertheless, the work will be recorded in the first week of February 2021.

André Parfenov was commissioned to write a new composition for violin and piano for the Lucia-Schäfer-Saal in Rotenburg (Wümme). The occasion is the anniversary of “70 years of chamber music in Rotenburg”, which will be this year. The world premiere will be played by the Parfenov Duo themselves and will take place on April 22, 2021.